Summer brings a lot of outdoor gathering and celebrations, from graduations, to weddings, to Independence Day and more. Here are some fun games for kids and adults alike! 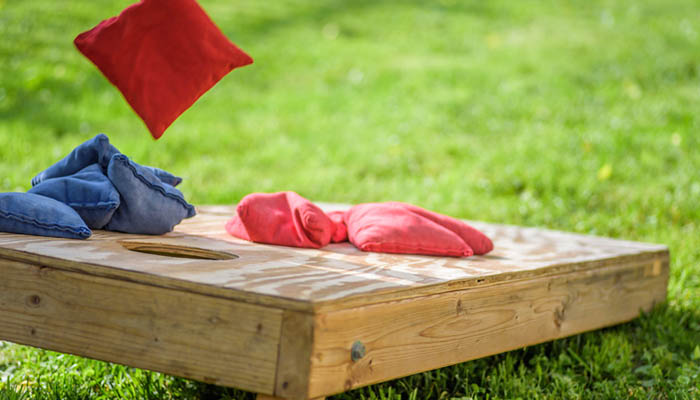 Cornhole consist of a tilted wooden board that is like a small tabletop with a hole at one end and competitors tried to land the beanbag in the hall from a distance. This game is available in a variety of designs, usually starting around $50 dollars, and higher for fancier models, such as those painted with your favorite sports team or a number of other designs.

These consist of a 3-tiered (laddered) PVC stand of levels in which contestants toss to golf balls (or tennis balls) that are attached with a nylon rope and try to hook them on one of the ladder “steps.”

This is as hilarious as it sounds! Contestants place pantyhose over there head like a cap containing a tennis ball at one of the far ends of the “toe.” The objective is to tilt and swing your head to bowl over plastic water bottles set randomly in an area. The bottles are not aligned like in regular bowling, which makes it much more of a challenge. Whoever knocks down the most bottles in 60 seconds wins.

Sure, you’ve probably played Jenga, but have you ever played the giant version? This 5-foot-tall version of the classic game is hilariously fun!

3. Doughnuts on a string

This is both fun and delicious. You can use a string, cord or rope, threaded with doughnuts and stretched at a distance. Kids have to hold their hands behind their backs and attempt to eat doughnuts off the string. They compete to see who can finish their assigned doughnut first.

4. Human ring toss (on land or in water)

Fun and challenging! Needed: Six 36-inch inflatable round pool tubes (inner tubes). Someone stands at a distance another person to land the rings over their head. Kids can work as teams, where each pair is able to move to try to catch the ring with their head as it is tossed. You can also play this game in the shallow end of a pool.

This is hilariously fun. This is a game you can make yourself with a few items and some creativity. You’ll need two pairs of flip-flops and 2 large pieces of cardboard. Cutout the cardboard in the shape of two big feet. Tape the flip-flops to the center. Make a pair of these feet for each contestant, who will each have to compete in a race wearing the giant feet.

Amanda Walker is a regular contributor and assistant editor at TenthFloorLiving